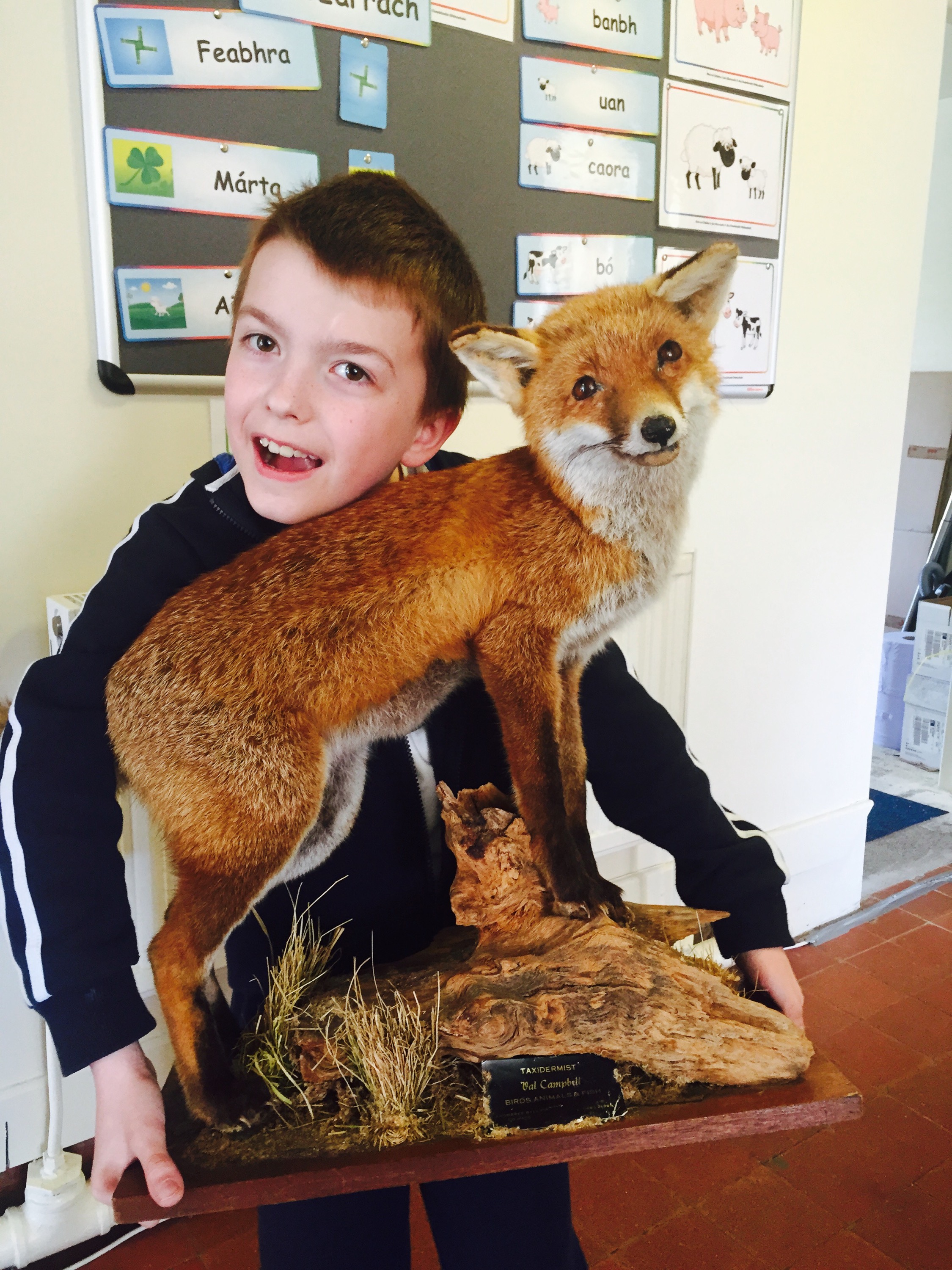 Carol from Connemara National Park paid a visit to our school and brought a number of stuffed mammals living in Ireland.  We got to examine their appearance and she told us all about them.  Here is what we found out…..

The Red deer is the biggest wild animal in Ireland and is native to Ireland for about 10,000 years.  It  weighs about 150-200kg.  It’s  a herbivore only eating plants, it loves to take bark off trees. Red deer use antlers as a tool to root up potatoes. The female is called a hind and the baby is called a calf.  The male is called a stag. Until 1 yr old, the male and female look the same,  then we can start to tell the difference between the stag and hind.  The stag grows two antlers every year. You can guess the age of a stag by counting the antlers and adding on one.

Sika deer –  The male is called a stag and female is called a hind.  The sika deer is 150 years old, they originally came from Japan. They can be found in Tourmakeady, Killarney National Park and Wicklow.
The Otter is second longest, water dog with webbed feet, skin in between toes makes him a great swimmer. The common otter likes to go in fresh and salt water. It likes cray fish, frogs and shellfish. The otter has strong teeth to crunch the shellfish. They spend 10 hours a day in water and their skin never gets wet. When they come to the surface, air bubbles come with them, they stay with their Mom for a year after birth. Their home is called a holt.
The American Mink– people allowed to trap and catch, they can devastate fisheries. Minks were brought into our country because of their soft coat. It would take 150-200 minks to make a mink coat. They were kept in cages in Co.Cavan and reared for their coat. They have been here in Ireland for 70-80 years now. 10,000 were released from their cages but 7,000 died after two days from the cold. The ones that survived are troublesome causing problems with our biodiversity and doing damage to our native animals.
Pine Martin – from the mustelid family
The pine martin is often referred to as a tree cat. It has much bigger ears than the mink. It is light brown in colour, its claws are retractable, giving him great grip. He likes rats, mice and birds eggs. He often goes to an attic or old ruin to have its babies. They also like apples, blackberries and raisins. The pine martin is a very shy animal like the otter. The mink on the other hand is aggressive.
The Stoat – from the mustelid family
The stoat loves stone walls. They’re great hunters, they love birds, rats and mice. The stoat can jump up on a rabbit and bite into the rabbit’s neck killing it instantly. The stoat has strong jaws and sharp teeth and is a great rat catcher.
The Badger – from the mustelid family
The badger has very long nails and his home is called a sett. Underneath his ground the badger has lots of tunnels with rooms for all their relations. The badger is a very sociable mammal.  95% of their diet is worms. The badger loves mice and frogs too. If you see them round during day this may indicate that there is something wrong, they usually come out at night. Scrapping holes in grass indicate their presence. They do a lot of damage to golf courses. The male is called a boar and the female is a sow.
The Fox – We have no wild dogs in Ireland but we do have the fox. The fox is a really clever creature.   It has a high pitched bark which is usually heard at night.  It is a cousin to our pet dog.  It doesn’t mind where it lives: built up or quiet areas.  It likes dustbins…hard cheese, gone off yoghurts etc.  It eats chickens, lambs, rabbits and ducks.
Irish Mountain Hare – The Irish Mountain Hare can travel at a speed of 40km per hour.  It’s a herbivore and does damage to young trees. It likes living in the bog. Jack is a boy hare and Jill is a girl hare, a baby hare is called a leveret. The Jill often departs her babies for security and at night she brings them together.
Red squirrel – like the red deer, the red squirrel is native to Ireland.  There are no grey squirrels in the west of Ireland. They like ripened seeds from cones, acorns, nuts and berries.   Its home is called a dray.  They have sharp nails for grip. They need their tail for balance. The red squirrel is a cousin to the rat, chimp monks, gerbils and rabbits.
Hedgehog – The hedgehog is an insectivore, it loves earwigs, slugs, snails and insects. The hedgehog has a lot of fleas but they only live on the hedgehog. You could give him water to drink, not milk.
Pigmy Shrew – The smallest mammal in Ireland is the pigmy shrew. Its body is 3cm and his tail is 3cm. The pigmy shrew is very light, they must eat very regularly or they won’t survive. They only live for a little over a year.